Simulation of the world around us by numerical computation has improved a lot in the past decades. Mathematical modeling and the associated scientific software development has shown a large growth, in many different domains, also in water management. With Johan Dijkzeul we will look back at this period. Johan has worked for many years at VORtech and is going to retire end of this year. 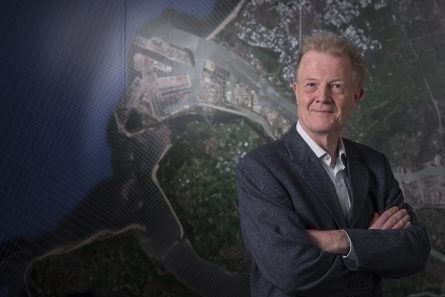 How did you get in touch with the application of mathematics in practice?
Johan: “The starting point was my studies applied mathematics at the Technical University of Twente, currently known as the University of Twente. My MSc project and internship at the department of Mathematical Physics brought me in contact with the department of transport and public works (Rijkswaterstaat). This relationship has been important in all my work to this date and made applied mathematics the common topic in my career kept to this date.”

Where did you first apply mathematical models?
Johan: “The Delta Service of Rijkswaterstaat was my first employer. Here, it was examined whether mathematical flow models for the Eastern Scheldt and the North Sea could be used for research and consultancy. An important conclusion was that computer models based on the software package Waqua could replace the scale models at Delft Hydraulics laboratory (WL) to a large extent. Also models for the North Sea become used operationally (24×7) in storm surge prediction systems.” 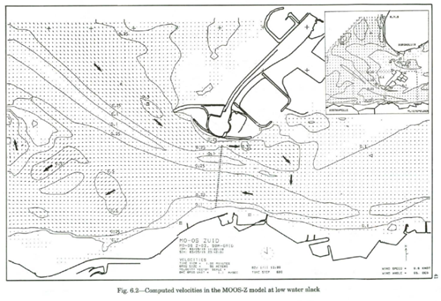 Variation in flow patterns around the southern part of the storm surge barrier in the Eastern Scheldt.

How did that development proceed?
Johan: “Very important was the collaboration of the Delta Service with the Rand Corporation in Santa Monica (USA). This resulted in the extension of the horizontal flow model Waqua to the 3-dimensional Triwaq/Trisula software package. I switched to the privatised Service Information Processing Department of Rijkswaterstaat in 1989. Here, these two computational kernels became part of the completely redesigned modeling system Simona together with the modules for pre- and post-processing. This modeling system is still mission critical at Rijkswaterstaat for rivers and tidal waters.”

Do we handle this kind of software more professionally now?
Johan: “Sure. Because of the increased use of Simona models, operationally and for research and consultancy, a professional organization for management, maintenance and development of the modeling software became essential. After joining WL (now Deltares) in 1997, I became involved in operationalization of many new developments in (sub)models for water movement, water quality, waves and morphology within the Delft3D modeling system. Here maintenance plays also an important role to keep and improve where possible the quality of the system.” 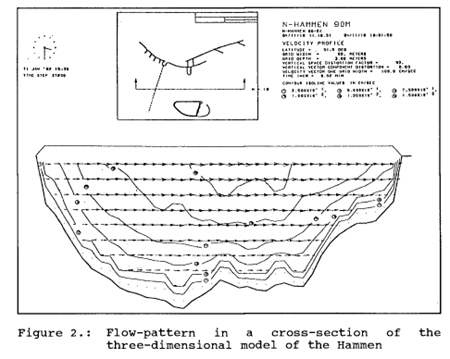 Flow velocities in a vertical cross section in the northern part of the storm surge barrier in the Eastern Scheldt.

How reliable are those mathematical models?
Johan: “That depends on how they have been developed and how they are being used. For the correct use of mathematical models first standards have been defined in the Netherlands (good modeling practice) and later also in an EU project. My interest in quality of modeling software resulted also in my role as a project-auditor for ISO9000. The expertise at VORtech with development, management and maintenance of scientific software and mathematical models was a major contribution to European projects for climate research, the quality of truck tires and improvement of financial and economic models.”

How do you look back on 40 years of mathematics and scientific software?
Johan: “I can look back on a particularly dynamic and challenging time. The development of high-performance computers in the past decades was particularly beneficial for the development and application of mathematical models, especially in the world of water management. It was crucial for me to have been involved in multi-disciplinary teams with different perspectives: research and consultancy, model development, software development, and (operational) applications.”

Why did you move to VORtech?
Johan: “The founders of VORtech and their work was already known to me for a long time. The transition to VORtech gave me the opportunity to apply mathematics and my experience to a wider field of applications. Also, development, management and maintenance of Simona became again part of my work. That was also the case with the operational prediction systems at the Hydro Meteo Center of Rijkswaterstaat. And the development of an operational detailed 3D-flow model for the port of Rotterdam was as the combination of development, management, maintenance and operational application of a complex mathematical Simona model.” 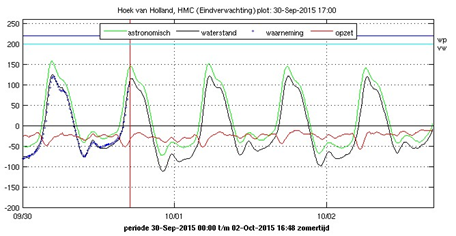 Predicted and measured water levels at Hoek van Holland from the operational system of Rijkswaterstaat.

How do you see the future for mathematics in software?
Johan: “I see the future of applied mathematics as particularly favorable. Mathematical models are there to stay. With the emergence of machine learning for data-driven problems we can now clearly see the algorithmic thinking and the development of good software. The development will continue. However, it is always important to realize that models are only an approximation of the real world. Dealing with the uncertainty of predictions from mathematical models will therefore be the biggest challenge.”