Waves play a central role in many fields, like electromagnetics, seismology, and acoustics. A lot of mathematics is involved to simulate the waves. The propagation of waves through a medium is described by the famous wave equation. This is a partial differential equation that is not easy to solve. The time-independent form of the wave equation is called the Helmholtz equation. Also, this equation is mathematically a hard nut to crack.

Solving the Helmholtz equation is a hot topic for researchers and practitioners the last decades. In the new book “Modern Solvers for Helmholtz Problems”, the latest developments of this topic are presented. The book is edited by TU Delft experts Domenico Lahaye and Kees Vuik together with VORtech’s mathematical consultant Jok Tang. It was motivated by the TU Delft workshop on “Recent developments in Fast Helmholtz Solvers”, which took place in the spring of 2015. A number of speakers at the workshop and other experts contributed to the book, and shared their unique insights into the topic of the Helmholtz solvers.

Various contributions of the book were based on the complex shifted Laplace preconditioner, which was introduced in a seminal paper from 2006, written by Yogi Erlangga, Kees Oosterlee and Kees Vuik. This preconditioner has proven to be a major breakthrough in the research of fast Helmholtz solvers. Using this preconditioner, the linear systems derived from the Helmholtz problems can be solved significantly faster. 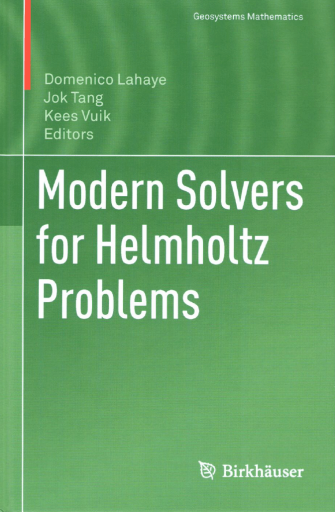 Jok Tang: “The complex shifted Laplace preconditioner for the Helmholtz problem has been a common thread running through my academic and industrial life. I investigated these preconditioners during my MSc and PhD studies. And, furthermore, my VORtech colleagues and I used and accelerated them for clients. It is a challenge to accelerate the Helmholtz solvers, so that even larger-scale problems can be tackled. I’m glad to see that there has been some good progress on this topic last couple of years. And I’m honoured that we were able to bundle these latest developments into a new book.”

The chapters of the book describe new variants of the complex shifted Laplace preconditioner, in order to accelerate the current Helmholtz solvers. These variants are based on domain-decomposition techniques, Taylor-series expansions, deflation techniques, and multi-level approaches. Also, advanced implementations and the industrial application of the Helmholtz solvers are discussed in detail.

The book is published by Birkhäuser, and can be purchased as an eBook or a hardcover from the Springer website.