On April 29, 2016, VORtech turned 20. And we made a party of it! To celebrate our 20th anniversary, we had chosen to treat our relations to the most valuable that we have to offer: knowledge. We did this in three ways. First of all, we held lectures with lunch or drinks across the Netherlands in the month following our anniversary: VORtech on Tour. Secondly, every Tuesday in May we gave public lunch lectures in our offices in Delft. Finally, there was a major celebration event at the end of May.

VORtech came to you in the spring! We organized presentations, including a lunch or drinks afterwards, at several universities with which we maintain good relations. The lectures were open for everyone that wanted to join: researchers, students but also anyone who is interested from outside the university.

In these lectures, VORtech showed how mathematics and scientific software development are used in a commercial setting. We discussed the typical working day of a scientific software engineer at VORtech, the kind of projects that we do and the developments that we see. We think that this is interesting for students, to show them what their work could be like in the future. But it will also give researchers a view on the aspects of transferring research results to commercial practice.

The program of VORtech on tour is: 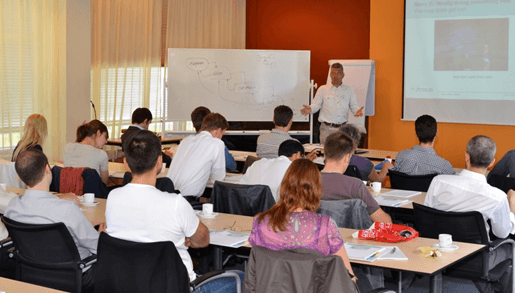 Under the title “VORtech treats on knowledge” VORtech organized double public lunch lectures, each Tuesday in May 2016. The location was our offices in Delft (Torenhove building, Martinus Nijhofflaan 2, in Delft).

The schedule was the same on each Tuesday:

The following topics will be presented:

On Tuesday May 31st, 2016, we celebrated our 20th anniversary with an event in the Meisjeshuis in Delft. Around 16:00, under the theme ‘Models and Data, hindsight and forecast’ we explored the intersections of predicting with fysical models and with data. Contributions were made by Arthur Veldman, professor in Computational Modeling at the University of Groningen, and by Geurt Jongbloed, professor in Mathematical Statistics at the Delft University of Technology. Afterwards we had celebration drinks in the hall and on the terrace of the Meisjeshuis (address: Oude Delft 112 in Delft).