First, we used statistics to investigate the extreme values in the data sets and to see if there is a difference in turn-out times during work hours as compared to after-work hours. We used change point analysis to determine which data we can and cannot use to establish characteristic turn-out times.

Data science analyses like these can be used to optimize the internal processes in the fire department, like determining which stations should approach a fire and how many firemen should be available at any time.

A very important issue in this kind of analyses is how to deal with erroneous and extreme values in the data sets. It can be hard to distinguish these two categories. Turn-out times of zero minutes are probably always erroneous. But a long turn-out time can be real, or it could be caused by poor reporting. It proved to be hard to distinguish erroneous and extreme values with statistics alone. It took expert knowledge to select erroneous data points that should be removed from the data set.

On the other hand, the remaining analyses might also have been done with statistical techniques that are insensitive to extreme/erroneous data points. Such statistical techniques use inter quartile distances (distance between first and third quantile) that indicate the width of the distribution. There is not a single “right”method that can always be used. It’s just a matter of finding a reasonable method.

Use of historical data sets

Another issue that we dealt with was the fact that historical data sets may have been gathered under different circumstances. Hence, taking all historical data together may lead to serious errors. Yet, a longer time series is preferable because it would improve statistics. To see how far back the data is still consistent with today, we used change point analysis. This is a powerful tool that can spot changes in the underlying statistics of data automatically.

In some locations, we clearly observed change points. In those cases, the fire department can be asked whether the change in statistics can be explained. For example, the staffing or the protocols that are used may have changed. But regardless of the cause of a change, the change points indicate how much of the historical data can be used for analysis of today’s situation. 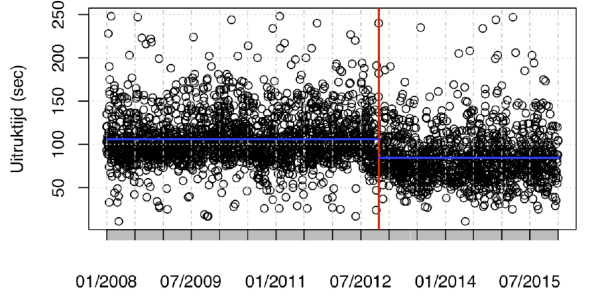 We have completed a succesful data analysis for the fire department. But in the end, the data was limited. When more data becomes available, the analysis can be done more thoroughly. The methodology can then also be extended and improved. Eventually, this could become an operational software tool for monitoring turn-out times. The first steps have been made and already provide valuable insights.